Even though Telstra has apologized for its mobile voice and data service and assured everyone that it has returned to normal levels. They can’t reverse the damage they have brought to cash for cars Brisbane business today!! With this crippled 3G and 4G networks and problem in mobile voice and data services, cash for cars business have lost many clients. There has been severe damage that needs to be recovered. Appointments are made days or months before the deal, with this poor connection and interaction between the client and the business, has left a huge mark on revenue generation of each cash for cars business today.

This crippled network connection affected across Australia last morning. Telstra though apologizes yet is still denying the fact that they have no clue what caused the problem. Whatever caused the problem, it majorly affected cash for cars business with no doubts.

People tried opting to Telstra complaint webpage and even it was down. No wonder who messed up with their server. NAB and Commonwealth Bank both have given their statements affirmative of the problem that was impacting EFTPOS facilities.

NSW police proclaimed that this outage has the possibility of affecting people trying to call Police Assistance Line (131 444) or triple zero (000).

“The advice we have received indicates Telstra customer mobile phone calls to Triple Zero (000) should automatically be connected via another carrier; however, if you are experiencing problems use a landline” 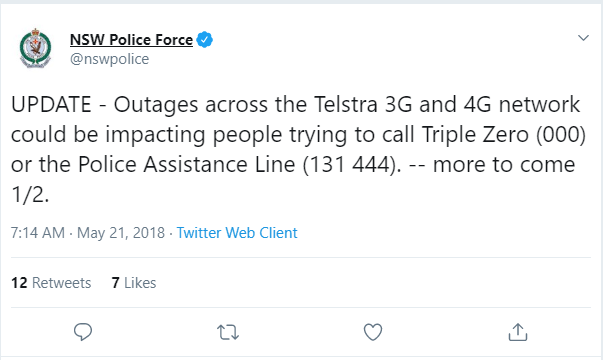 Communication difficulties due to Telstra outage has faced a severe crash in cash for cars business today!

Several trains services in Victoria were also reported to be canceled due to a communication issue. Even it left a huge impact on roadside assistance along the course. Cash for cars business who deals on regular and appointment-based clients have faced a huge crash due to Telstra outage. This just didn’t affect the business, there have been confusions among clients and cash for cars service providers from both ends due to communication difficulties.

Group managing director of Telstra’s networks, Mike Wright have given his statement on Monday outage that this was,

‘Not related to earlier impacts. Today at around 10:00 am a fault in the core of our network caused some problems with connectivity to the 4G layer of our network’

yet affirmed that they are not aware of the root cause.

“That meant all our customers on our network were connecting to the 3G layer, and of course with that big shift in traffic, that had some interruptions in the amount of data the network could carry and also caused some calls to fail and some customers to intermittently lose service.

Telstra went on to Twitter to give their customers a sigh of relief..maybe..or something?

Not that Telstra is wrong for getting all the servers down and crashing business to the core level, but we are hoping to hear a genuine answer from them that relates the issue that became a reason for this outage. They further went on to Twitter to calm the storm, but this just wasn’t enough maybe,

“The issue is impacting some 4G mobile voice and data services nationally, which is also causing congestion for 3G services. We’re working to resolve the issue and are investigating the root cause. We’re sorry for the inconvenience”

Telstra recovered network connection almost within a few hours, but these two hours was a peak time for cash for cars business especially. No wonder they have left a huge mark on sale scale of cash for cars business with this wide outage! At 12.16 a statement from Telstra was issued that they are progressing in getting this problem fixed. Later around 2 pm,

“mobile voice and data services have returned to normal levels” statement was given officially.

“We’ll closely monitor network stability and performance and continue supporting our customers to restore their services,”

At least they had the audacity to apologize to their customers. It’s okay, things like this happen but for these many hours, this just doesn’t seem right.

We are hoping Telstra soon comes to a conclusion for what caused the problem because of this affected business and businesses and communications beyond repair.

Mr. right confronted everyone with their statements after the network was restored,

“Anytime we have an event like this, we work day and night to identify what the root cause was and make sure we move quickly to fix what it was. Sometimes it’s a software fault, sometimes its a bit of hardware so we will be working as quickly as possible.”

Not just now, Telstra had an outage on May 01 too that also affected cash for cars business majorly with no compensation or whatsoever!

Telstra left its customers across the country deprived of receiving and making voice calls for approximately three hours on May 01. Later, they found out that the issue was due to the National Broadband Network and 4g so compensation and complaints subsided.

Many customers have called and are looking Telco to offer compensation for the loss people have faced during these hours. There were medical loses to financial loses, how is telco company going to be able to compensate all? They sure need to come up with something better to satisfy their customers or people will start losing faith in not just them, rather all of the vicious cycle of communication and network authorities.

People were definitely outraged with this outage!!

Some went on to their twitter to file their complaints to the public,

While some had questions for what actually is happening since their phones kept showing SOS only! 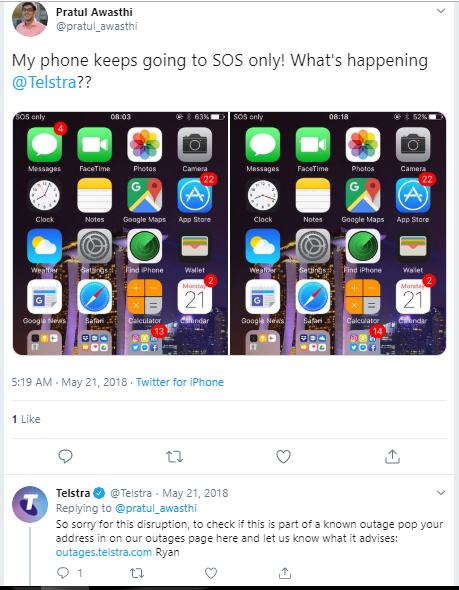 One of the great thing throughout the outage was Telstra trying to fix the problem and responding each tweet or post personally, individually and publicly at the same time, 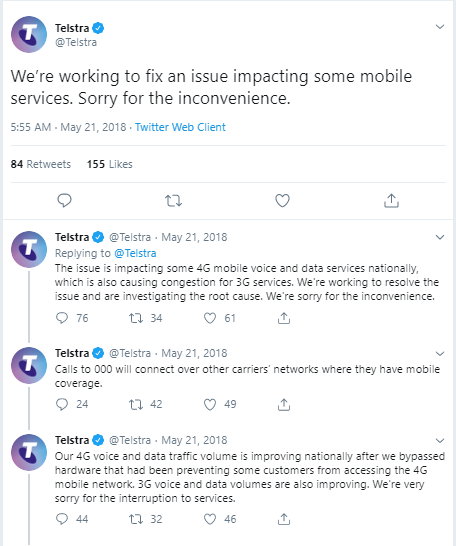 By MD Pixelz|May 21st, 2008|Cash for Cars|Comments Off on Telstra outages has affected cash for car business today!!

About the Author: MD Pixelz